In 2014, following years of development, Mongozo introduced a new, innovative world first. Mongozo Buckwheat White is the only organic, gluten-free and Fairtrade white beer on the market.

As an addition to the range of exotic beers it had on offer, Mongozo introduced a world first in 2010: Mongozo Premium Pilsner. This lager combines three unique elements: organic, gluten-free and Fairtrade all in one bottle.

The mangos that give Mongozo Mango its exotic flavour come from South America. It was important to Jan Fleurkens that this beer, too, would be Fairtrade-certified.

Henrique Kabia was killed in a tragic accident in June 2003. Mongozo continued along its path, as that is what Henrique would have wanted. Jan Fleurkens then developed his own recipes and, in the spring of 2005, launched Mongozo Coconut. This was when the exotic concept of drinking Mongozo out of a coconut shell was born. Mongozo Coconut is also a Fairtrade-certified beer.

Mongozo Banana saw the light of day. This was the first beer to carry the Fairtrade label worldwide and was brewed to a traditional recipe originating from the Masai people, who live in Kenya and Tanzania. 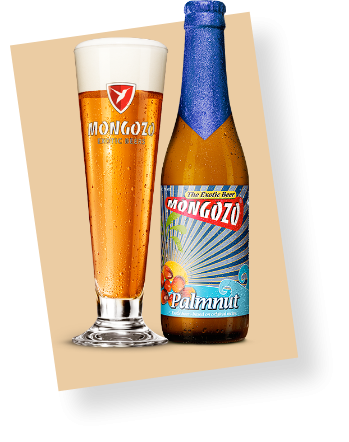